I was at a meeting at OLMC earlier this week, helping several husbands prepare to discuss the topic “Husbands, Serve Your Wives” at our May Marriage on Tap event. Gary Galvin, one of the founders of this blog, mentioned that the issues surrounding stay-at-home moms relative to working moms concerned him.  Never having given this subject too much thought, I was surprised to learn that, in fact, it is a major issue in our parish and across the country.

The various constituencies seem to break down roughly as follows:

In my opinion, the common thread running through all of these scenarios is sacrifice.  The nature of these various sacrifices differ, and deserve some discussion.

Obviously, families in which one of the parents, usually but not always the mother, stay home to care for the children sacrifice the earnings the spouse foregoes.  There are some lifestyle implications as well as increased pressure on the working spouse.  The hidden sacrifice arrives in the form of social attitudes that seem to discount the stature of the stay-at-home parent, as if effectively raising a gaggle of young children is not one of the hardest jobs on earth.  Home schooling lessens this effect somewhat, but brings with it an entire palette of other issues, some social, some academic.

Sarah Galvin, Gary’s wife, gave up a promising law career to be a stay-at-home mom for their four children.  Sarah may do a The Good Wife and return to practicing law someday. In the meantime, she has agreed to a non-paying job with a 24-hour a day shift and responsibilities that will affect how their children function as adults.  This is sacrifice.

Families in which both spouses work full time have given us the term “working moms,” which is hugely redundant.  “Working moms” often have demanding occupations, after which they head home to face a torrent of needs from the children and, in some cases, a husband whose contributions to running the home may be minimal.

Working moms get left out of many activities involving their children, ranging from dance 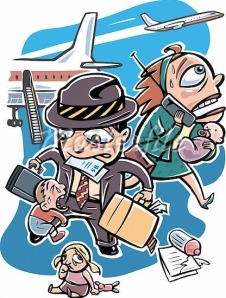 recitals and ball games to PTO meetings, and typically are unable to pursue interests that involve evening get-togethers, such as Bible study or book clubs.  By necessity, they generally raise multi-tasking to an art form, devoting time at work to planning family stuff, and taking calls or emails at home during their family time.  Working moms generally work according to schedules that are so tight they squeek.  This is sacrifice.

[BTW, the consensus at our meeting the other evening was that the term “working dads” is an oxymoron.  When our three daughters were little and Nancy would get out for a Saturday afternoon, I would feel a pretty healthy sense of accomplishment if I kept all three kids out of the emergency room until she returned.  As for housework–cooking, laundry, etc.–that was simply out of the question.  Surviving four hours in charge of three kids was, for me, a major accomplishment, even if two of them were napping at the time.]

Parents in situations where they’ve arranged offsetting schedules, or one (or both) work part time, perhaps in addition to a full time job, often sacrifice career mobility in order to make their domestic arrangements work.  Telling a boss, “Sure, I’d like the promotion. The thing is, I need to leave at 2:30 to get home in time for my wife to go to work” is not how one gets ahead in this corporate-centric world in which the needs of the employer generally trump the needs of the employee.  Families which require a job and a half to make ends meet need be very selective when it comes to accepting a job; oftentimes the choice is not the best job, but the job that makes the other stuff possible.  This is sacrifice.

Couples who wish to raise children and are unable to conceive occupy a radically different world than most of us.  The dizzying array of less-than-satisfactory choices facing them is a minefield, ranging from adoption to complicated medical procedures to precise timing-and-action protocols involving cycles and temperatures, etc., that destroy the holy pleasure of making a baby and turn it, instead, to something mechanical, hugely expensive, and/or contrary to Church teaching.  The emotional costs of repeated failures can be overwhelming.  Some couples persevere and make the transition from being a couple to being a family, but make no mistake about it.  This is sacrifice.  I have trouble expressing the respect I feel for these couples, who are so willing to do so much to bring a child into this world or into their lives.  God bless all of you.

Finally, the couples who decide, or for whom it has been decided, to remain childless.  For these couples, daily life will undoubtedly be simpler, less dramatic and generally less stressful.  In the best cases, theirs will be lives of tranquility, reflection, perhaps travel or high-profile careers.  But they will have to derive their earthly joys from one another.

There can be no thought of legacies or future generations.  One of my big fears, that of being forgotten after my death, is more or less assured for these couples. Just as you probably cannot remember who was the MVP of the SuperBowl in 2002, or who was the junior senator from your state in 1978, most of the memories of you and me will reside in the hearts of our children.  Choosing to remain childless, then, may be choosing to be forgotten.  Though it is of a different kind, this is a sacrifice, too.

1 thought on “Children of Sacrifice”