As a child we were all probably asked countless times, “what do you want to be when you grow up?”  Like many of you, my answer changed over the years.  I imagine, like my 4 and 6-year-old daughters, at one time I wanted to be a princess or a ballerina.  As I got older, I can remember wanting to be a doctor, a lawyer and I think even a professional athlete.  I don’t remember all the different answers I might have given, but I can most definitely tell you one thing I know I didn’t say.  I don’t believe I ever said I want to be a wife and mother.  Sure, when I was little I might have said I wanted to be a “mommy” but as I got older I would have never considered either one of those “vocations” to have been a primary responsibility.  Sure, I would have said, I’ll be a wife and mom but my “real” job will be … .

My oldest daughter is a Little Flower at Our Lady of Mount Carmel and I volunteered at her meeting last week.  Her principal, who is a Dominican Sister, spoke about vocation.  She told a room full of kindergarten through 6th grade girls that on a daily basis they witness the two primary vocations for women in the Church.  Obviously, the sister in the habit was an easy one, but the girls were a bit perplexed on the other one.  A priest … one little girl asked.  No, this second vocation is one that these beautiful young girls witnessed every day in the very own families – the vocation of wife and mother.  I came home that night and told Gary that I don’t ever remember anybody telling me as a young girl that being a wife or a mother was actually a vocation.  It wasn’t until we became parishioners at Our Lady of Mount Carmel and I started attending the Mothers For Children meetings that I ever heard anybody talk about being a mother as a vocation.  You mean that was enough?  I didn’t have to have some “other” label next to my name to really define who I was – let people know what I really do. 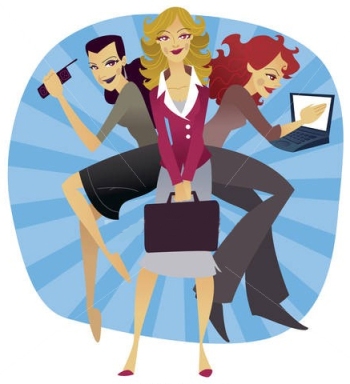 Why was I 30 before I ever even heard the term vocation not associated with a priest or a nun?  I suppose, like much of the moral decline in the country and around the world, it’s in many ways cultural.  I know that’s simplistic and there are many layers to this onion, but it’s the truth.

I am so grateful that my daughters won’t have to wait until they are 30 to understand that being a wife and mother is actually a vocation.  It’s enough.  It’s a calling.  It is arguably why God put us women here on this earth.  Now, that’s not to say that we women don’t have lots of amazing other gifts to offer the world, but if you take a real broad look at civilization and you boil it down to the absolute basics – everything begins with family.  If the center falls apart – nothing else matters.

So, here’s to all those women out there who have answered God’s call and who have decided that being a wife and a mother is their true vocation.  Society might not buy into this one yet, but I imagine that room full of beautiful young ladies I was with the other day will have something to say about that sometime down the road.

1 thought on “I always dreamed I wanted a job, but what I really wanted was a vocation.”